Our research would not have been possible without the funding provided by a broad range of grants and industry collaborations. We are deeply thankful to all the entities listed below.

XCPS: Explainable Cyber-Physical Systems
Greater complexity in (semi-)autonomous systems is a double-edged sword. More sophisticated automation may actually increase, rather than decrease the difficulty for a human operator to comprehend the system’s behaviors. The problem may be exacerbated when the operator is denied a direct observation of the internal functioning of the system, thus having to surmise from sensor data what may be occurring. This can be a daunting task, particularly when some sensors are susceptible to failure. Many such systems, e.g., driverless cars, nuclear power plants, and spacecraft, are safety critical: a small error may lead to unintended, high-regret consequences. The goal of this project is to enable safety-critical (semi-)autonomous systems to inspect their own observations and consequently explain themselves in a language understandable by humans. 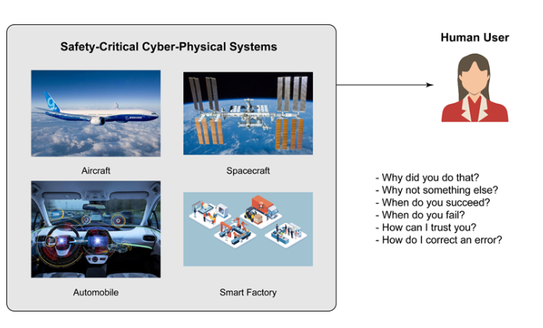 Explainable Reinforcement Learning: A Causal Approach
Trust is an essential prerequisite of adopting AI-based systems. Explainability has been identified as one key component in increasing both users’ trust and their acceptance of AI-based systems. Furthermore, explainability justifies an AI’s decisions and enable them to be fair and ethical. Reinforcement learning (RL) will play a key role is solving control and decision-making problems in domains that include healthcare, agriculture, transportation, social networking, e-commerce, etc. The objective of this project is to advance both the theoretical and algorithmic foundations of explainable RL (XRL) framework. We will adopt a human-centric methodology by taking advantage of existing knowledge of how humans define, generate, select, present, and evaluate explanations. In particular, we will first focus on devising methods for generating causal (e.g., counterfactual) explanations. We are collaborating with Prof. Xin Liu (CS, UCD) and Prof. Niao He (CS, ETH Zurich) on this project.
Cognitive-Aware Human-Autonomy Teaming

In the foreseeable future, humans will continue to play crucial roles in many, if not all, safety-critical missions, such as disaster relief, space exploration, and robot-assisted surgery. Intelligent machines (i.e., fully and semi-autonomous systems) should effectively function with their human teammates in a cognitively compatible manner. The goal of this project is to enable an intelligent machine to infer and predict its human teammate’s cognitive states (e.g., cognitive load, intention, and trust) and act accordingly (e.g., providing meaningful feedback to its human teammate) to guarantee performance of the collective human-machine team. We are collaborating with Prof. Sanjay Joshi at UC Davis and Prof. Allie Anderson and Prof. Torin Clark at CU Boulder on this project.
This video shows one set of data we have collected from a human subject while he was remotely controlling a group of five robots in a triangular formulation to acquire a sequence of targets randomly projected on the ground. The video on the left was recorded by an overhead camera while the one on the right was recorded by a pair of gaze tracking glasses. The subject's EEG activities were also recorded (not shown here).
Identification and Control of Neural Cognitive Systems
Safety-Assured Imitation Learning for Vision-Based Control of UAS in Complex, GPS-Denied Environments
Mitigating Ecological Destructive Events with a Network of UAVs
Our world is plagued with large-scale ecological disasters. Tragic examples include the Fukushima I Nuclear Power Plant calamity and the Deepwater Horizon oil spill. Today these disasters may be partially mitigated by teams of humans working in hazardous and labor intensive environments. To combat these destructive environmental processes, this project instead envisions the development of a network of UAVs that can combat these disasters, while keeping humans at a safe distance. We will use precision agriculture as a test bed to develop a multi-UAV system that will 1) use cameras mounted on UAVs to map out distribution of pest-infested plants in a heterogeneous grid pattern of crop plants with/without pest infestations, 2) transfer the map from the imaging UAV to a ground station (or a fixed wing aircraft) to compute an optimal mitigation solution, and 3) deploy actuating UAVs to implement the solution (release of natural enemies to the pest population on crops) to the plants with symptoms of pest infestation.

We are collaborating with Prof. Christian Nansen in the Department of Entomology and Nematology and Prof. Mohsen B Mesgaran in the Department of Plant Sciences on this project. Our project has been featured by two local news stations: ABC10 and CBS13, as well as ASME.
The video one the left shows experimental dispersion of vermiculite mixed with predatory mites. We are in the process of developing algorithms and control systems of the dispensing device so that we can precision-target the release of natural enemies by taking into account drone altitude and speed and account for wind speed and wind direction. The video on the right features one of our preliminary test runs to explore the idea of integrating drone, computer vision, and AI to identify weeds.
UAVs for Large-Scale, Real-Time Data Collection during Wild and Prescribed Fires
For environmental health scientists to study the impacts of wildfires on human health, gaseous pollutant concentration resulting from these burning events and quantitative information on the characteristics of aerosol distribution are needed. Currently ground sensors, manned airplanes, and satellites are wildly used for such purposes. However, the spatial and temporal resolution of data collected by these platforms are relatively low and not adequate for local and regional exposure assessments. Moreover, manned airplanes are prohibitively expensive and can be used only for sparse and sporadic measurements. The goal of this project is to explore the possibility of using a swarm of coordinated small (lightweight) UAVs, equipped with low-cost air-quality sensors, to provide three-dimensional (spatially and temporally resolved), real-time information on aerosol and gaseous pollutant concentrations over a large area affected by nearby wild/prescribed fires. This data should facilitate the local and regional human exposure assessments. We are collaborating with Dr. Ajith Kaduwela in the Air Quality Research Center on this project.

Smart Energy Management for Unmanned Aerial System Operation in Complex Military Missions  (07/18-06/20)
In recent years, unmanned aerial  systems (UAS) and other unmanned systems (UxS) have found their way onto the battleground to extend the reach of military forces, providing essential intelligence, surveillance and reconnaissance (ISR) as well as payload delivery and recovery. The increasing capability of such systems, particularly small and light-weight UxS swarms, has offered the Navy, the Marine Corps, and other military branches a significant opportunity to potentially reduce cost, increase system resiliency, and enhance operation effectiveness. However, one fundamental challenge impeding the wide deployment of small-scale UxS and UxS swarms is energy efficiency particularly in the context of complex military missions. This project aimed to tackle this challenge by investigating the fundamental physics governing the UAS energy performance and improving the mission KPIs through energy-oriented planning and control.This was a collaborated work with Dr. Xinfan Lin. The project was funded by the NEPTUNE 1.0 Program of the ONR.
This video shows our outdoor experiment procedure with which we were able to collect data sufficient to model the effects of wind on the UAV dynamics.
Data-Driven Personalized Training of Next-Generation Workforce (07/16-06/18)
Humans, in the role of either customers, designers, program managers, or workers, will always play a significant role in future manufacturing. However, the systems that the humans are interacting with are becoming increasingly complicated especially with the rise of large-scale industrial cyber-physical systems (CPSs), also called Industrial Internet of Things (IIoT). This project aimed at developing a data-driven method of modeling and analyzing manual expertise of humans while they are interacting with CPSs as well as traditional machines. The insights gained from this project can not only help us to build machines and CPSs that can collaborate with humans more efficiently and effectively but also help us to facilitate the knowledge transfer among generations. This was a collaborated work with Dr. Barbara Linke.
The video on the left shows the gaze data of an expert performing a manual grinding task; while the video on the right shows the gaze data of a novice performing the same task.